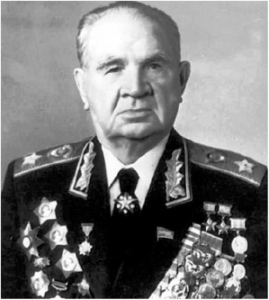 Since April 1918 in the Red Army, a cadet of the first Moscow military instructor courses of the Red Army in Moscow, participated in the suppression of the rebellion of the Left Social Revolutionaries in Moscow in July 1918. Member of the Civil War since the summer of 1918. He commanded a company in the brigade of R.F. Sievers on the Southern Front against the Don Army of General P.N. Krasnov. Then – assistant commander of the 40th Infantry Regiment in the 5th Infantry Division on the Eastern Front. In the spring of 1919, at the age of 19, he became commander of the 43rd Infantry Regiment of the 5th Infantry Division, fought at the head of it on the Eastern and Western fronts, was awarded the 2nd Order of the Red Banner, personalized gold watches and gold weapons.
In 1925 he graduated from the Military Academy of the Red Army named after M.V. Frunze, in 1927 – her oriental faculty, after which in July 1927 he was sent as a military adviser to China. From September 1929 – head of the intelligence department of the headquarters of the Special Red Banner Far Eastern Army V.K. Blucher. Since November 1932, he was the head and military commissar of intelligence courses for the improvement of command personnel at the intelligence department of the Red Army Headquarters.

In 1936 he graduated from the Academic Courses at the Military Academy of Mechanization and Motorization of the Red Army named after I.V. Stalin and transferred from intelligence work to command service in the troops. From December 1936 – commander and military commissar of the 4th separate ized brigadmechane, from April 1938 – commander of the 5th rifle corps, from July 1938 – commander of the Bobruisk Army Group of Forces (later reorganized into the 4th Army). At the head of this group he participated in the liberation of Western Belarus in September 1939. As commander of the 9th Army, he participated (and not very successfully) in the Soviet-Finnish war of 1939-1940. Then he returned to the post of commander of the 4th Army in the Belarusian Special (from July 1940 – in the Western Special) military district. Since December 1940, he was the military attache at the USSR embassy in China.
During the Great Patriotic War from May 1942 – commander of the 1st reserve (from July – 64th) army, and then the operational group of the 64th army. Since September 1942, he commanded the 62nd Army, which became famous for the heroic defense of Stalingrad. In April 1943-May 1945, he commanded the 8th Guards Army, which successfully operated in the Izyum-Barvenkovskaya and Donbass operations, in the battle for the Dnieper, Nikopol-Krivorozhskaya, Bereznegovato-Snegirevskaya, Odessa, Belorussian, Warsaw-Poznan and Berlin operations.

The title of Hero of the Soviet Union with the award of the Order of Lenin and the Gold Star medal of the Guard was awarded to Colonel-General Vasily Ivanovich Chuikov on March 19, 1944 for heroism and courage shown in the battles for the liberation of southern Ukraine.

Colonel-General Vasily Ivanovich Chuikov was awarded the second Gold Star medal of the guard on April 6, 1945 for heroism and courage shown during the Vistula-Oder strategic offensive operation.

He died on March 18, 1982 in Moscow. According to the will, he was buried in the hero city of Volgograd on Mamaev Kurgan at the foot of the Motherland monument.