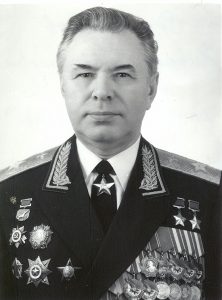 The future ace pilot was born into a peasant family. In 1930, the family moved to Astrakhan, where in 1935 Nikolai graduated from the 7th grade. For the next two years, he studied at the factory apprenticeship school (FZU). After graduating from the FZU, he worked as a fitter and turner at a shipyard named after the III International. At the same time he graduated from the library technical school. Since 1939, he simultaneously studied and underwent primary flight training at the Astrakhan flying club.

In December 1940, the Zolotovsky RVC of the Autonomous SSR of the Volga Germans, a 20-year-old young man, was drafted into the Red Army and sent to the Bataysk Military Aviation Pilot School named after A.K. Serov. In October 1941, the school was evacuated to the city of Yevlakh, Azerbaijan SSR, where he completed his studies. After graduating in March 1942, senior sergeant Nikolai Skomorokhov was sent to serve in the reserve aviation regiment of the Air Force of the Transcaucasian Military District, stationed in the Baku region.

The senior pilot of the 164th Fighter Aviation Regiment of the 295th Fighter Aviation Division, Senior Sergeant Skomorokhov, began fighting on the fronts of the Great Patriotic War at the end of November 1942 in the foothills of the North Caucasus near the cities of Tuapse and Novorossiysk.

Senior Sergeant N.M. Skomorokhov at the beginning of the battle path.
Northern Caucasus, 1942

In January 1943, the young pilot scored the first air victory over the enemy, shooting down a German twin-engine Focke-Wulf 189 reconnaissance aircraft, nicknamed the “frame” by the Red Army. The German patrolled over the location of the Soviet troops and corrected the fire of his artillery. As a result of a swift frontal attack, the enemy was shot down. And in the summer of 1943, senior sergeant N.M. Skomorokhov received his first award – the Order of the Red Banner. The award list noted: “From December 1942 to March 1943, he made 79 sorties, of which 29 were for reconnaissance of enemy troops and facilities, 35 sorties for escorting attack aircraft, 12 sorties for escorting sea transports … Held 5 air battles , in which he showed mastery in piloting technique, perseverance in battle, courage and courage.
Junior Lieutenant N.M. Skomorokhov. 1943

In the same year, the pilot retrained for the La-5 aircraft that entered the troops and, acting first as a wingman and then leading a pair, took part in 58 air battles, personally and as part of a group of 12 enemy aircraft: three Focke-Wulf 190, six Me-109s and three Yu-87s. Soon, for the heroism and courage shown in the battles with the Nazi invaders, Lieutenant N.M. Skomorokhov was awarded the second Order of the Red Banner.

Lieutenant N.M. Skomorokhov near his fighter in 1943

At the end of 1943, he was transferred to the 31st Fighter Aviation Regiment of the same division and was appointed flight commander, and in March 1944 – deputy squadron commander and leader of the group, that is, the leader and organizer of the air battle. For skillful control of his pilots in the air and personally shot down enemy aircraft, the number of which increased to twenty, Senior Lieutenant N.M. Skomorokhov was presented by the command in April 1944 to be awarded the Order of the Patriotic War of the 1st degree, and in November of the same year – the Order of Alexander Nevsky. For the skillful leadership of his subordinates on the ground and in the air, in October 1944 he was appointed squadron commander.

Squadron commander of the 31st Fighter Aviation Regiment Captain N.M. Skomorokhov sets the task for the pilots of the squadron

In the autumn of 1944, the war moved to the territory of Hungary. Captain N.M. Skomorokhov conducted dozens of air battles in the Hungarian sky, scoring a number of brilliant victories. In the battles near Budapest, he destroyed a whole group of fascist aces, including from the famous 52nd (Diamond) Luftwaffe fighter squadron – the best in the German Air Force. Many air battles conducted by N.M. Skomorokhov during that period, can rightfully be attributed to the best examples of Soviet flying art. A classic example in this respect was the following air duel.

December 21, 1944 Captain N.M. Skomorokhov, leading a group of four La-5fn aircraft, flew out on a “free hunt” in the area of ​​\u200b\u200bLake Velence near Budapest. Here, Soviet pilots met eight FV-190 A4 fighter-bombers flying to bomb Soviet positions. Despite the numerical minority, Skomorokhov ordered to join the battle and himself shot down the leader of the enemy group. An aerial carousel spun in the sky. Two more Focke-Wulf groups approached the battle area. Considering their superiority overwhelming, they were overconfident. Soviet pilots attacked first one and then the second group. The Germans could not stand it, dropped bombs on their troops and retreated in disorder.