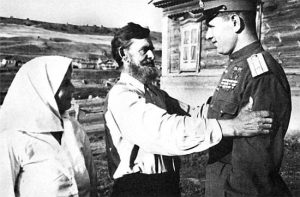 V. Vysotsky dedicated the “Ballad of the Dead Pilot”, the lines from which you read, to the fighter pilot, twice Hero of the Soviet Union – Nikolai Skomorokhov and his friend, namesake, Nikolai Gorbunov, who died in the sky of Budapest.

Nikolai Mikhailovich Skomorokhov was born on May 19, 1920 in the village of Lapot, Saratov province.

In 1930, Skomorokhov moved to the city of Astrakhan, where he completed a seven-year plan. Since 1937 he worked at the shipyard named after. III International, in parallel graduating from the factory school at the enterprise. In 1939, Nikolai Mikhailovich became a cadet of the Astrakhan flying club and a student of the library technical school, which he successfully completed.

In 1940, Skomorokhov voluntarily enlisted in the ranks of the Workers ‘and Peasants’ Red Army. In 1941, he became a cadet at the Bataysk Military Aviation School for Pilots. A.K. Serov, who, after the start of the war, from October 1941, acted in evacuation on the territory of the Azerbaijan SSR. Nikolai Mikhailovich graduated from the aviation school in March 1942, but was seconded to the front only in October.

In the active army, senior sergeant N.M. Skomorokhov was appointed to the post of senior pilot of the 164th IAP of the 295th Fighter Aviation Division, which was based at the Adler airfield during this period. And already in January 1943, he won the first victory on the LaGG-3 aircraft. Here is how Nikolai Mikhailovich himself recalled this: “I dreamed of a one-on-one meeting with the enemy. This moment has come. And what? Nothing happened around … Now there will be the first fight. What will she turn into? Whose life will it end?

There are two of us, of course. But it’s a damn “frame”. We knew that if you don’t immediately defeat her, then it will be difficult to deal with her.
Nikolai Skomorokhov in the cockpit of his “Lavochkin”
I attack from above. FV-189 is growing, growing in sight – it’s time to open fire. We disperse about twenty meters away. I go to an oblique half-loop, do not let the “frame” out of sight. And she, turning around, managed to fit in the tail of Evtodienko. At full speed I go to the fascist in the forehead, hit from all three firing points. Something flies off the “frame”, it flashes before my eyes. But still up in the air. He starts to leave, now fighting off Evtodienko. Apparently, the German decided that I had already done my part, went aside.

But I do not let both planes out of my field of vision. He turned the half-loop again, went straight to the “frame” and fired a burst at its gas tanks. Peck. Plume of smoke. Hitting the rocks.

An indescribable joy seized me. I yelled something at the top of my lungs, soared a candle into the sky.

And Evtodienko, my good commander and reliable comrade, walked at that time a little to the side and guarded me. He already knew that many died precisely in a fit of careless joy from success in battle, and looked into both.

And on the ground he said to Mikitchenko:

“Skomorokhov himself can already teach others to fight …”

Nikolai Mikhailovich got to the front in the most “hot” period: bloody battles unfolded over the Kuban, then on the Kursk Bulge and over Ukraine. And every day the skill of a combat pilot grew. In many ways, this was the merit of his commander, Major Mikitchenko. Each time he intelligibly analyzed air battles, taught tactics, which, coupled with the constant improvement of flying skills, soon made Skomorokhov a strong pilot, capable of single-handedly confronting several opponents. So, after another sortie, the following entry appears in his personal file: “On December 4, 1943, while performing the task of escorting IL-2, attack aircraft were attacked by eight enemy ME-109 aircraft in the target area.
Nikolai Skomorokhov at his plane, 1943
Despite the numerical superiority of the enemy, Captain Skomorokhov boldly entered into battle with him. In this battle, he showed exceptional examples of courage and, with his skill, did not allow enemy fighters to attack our attack aircraft. All attack aircraft returned safely to their airfield. In this air battle Comrade. Skomorokhov shot down two enemy planes. At the airfield, captain Skomorokhov was given a solemn meeting for the excellent cover of the attack aircraft and the courage shown in battle.

In the same December 1943, Nikolai Mikhailovich was transferred to the 31st IAP to the post of flight commander. As part of this unit, Captain Skomorokhov soon becomes a squadron commander. The number of his victories is also growing: by the end of 1944, the squadron commander had 25 personal and 8 group victories. For the heroism shown by the Decree of February 23, 1945, Captain N.M. Skomorokhov was awarded the title of Hero of the Soviet Union.

Having received a well-deserved reward, Nikolai Mikhailovich continues to fight the enemy with a vengeance. By March 1945, the pilot had 35 personal victories. But in heavy battles, our pilots also suffered irreparable losses. Nikolai Gorbunov dies, whose death was hard for Skomorokhov. Shortly before the end of the Great Patriotic War, the captain’s wingman, junior lieutenant I. Fillipov, dies. But it seems quite recently, having received the first La-7s, he, together with his wingman, attacked three groups of FW-190s, shooting down five of them …