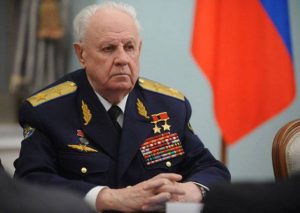 Air Marshal Efimov Alexander Nikolaevich is one of the most famous pilots of the Russian Air Force. At the age of twenty-two, he was twice awarded the title of Hero of the Soviet Union. During the Great Patriotic War, the Soviet attack pilot made over two hundred successful sorties on the Il-2 aircraft, nicknamed by the Nazis “Black Death” or “Meat Grinder”. Alone with his shooter and as part of a group, he shot down seven German aircraft in air battles and destroyed more than eighty at airfields. He is credited with the elimination of thirty enemy echelons, over one hundred and twenty tanks, about two hundred field and forty anti-aircraft guns. The number of enemy manpower destroyed is estimated in hundreds of people. During the fight against the fascist invaders, the brave pilot changed seven aircraft, not including those on which he made single sorties.

From an interview with A.N. Efimov: “According to the statistics, the pilot of the attack aircraft of the Red Army at the very beginning of the Great Patriotic War lived on average eight sorties. And this figure held for a very long time. I remember well that when I arrived from my eighth flight, the mechanic who met me said, not without surprise: “Have you returned?” Later, when we more or less learned how to fight and fly, this terrible indicator improved slightly, but still kept at a very high level – eleven sorties accounted for one downed Soviet attack aircraft. Think about it: according to official data, I “went” into heavenly attacks more than two hundred times during the war, that is, I had to die twenty times. Of those pilots who, together with me, graduated from the school in Uralsk, by the end of the war, no one was left.

Alexander Nikolayevich was born on February 6, 1923 in the Voronezh province in the village of Kantemirovka. Their house stood on a quiet street near the Trinity Church. And behind the hut, a meadow immediately began, and a river flowed, in which children swam and fished. The boy was raised by his stepfather, Nikolai Gerasimovich, an engineer and a hereditary railway worker. The future pilot was given his last name, and from early childhood he considered a tall, strong man to be his own father. In total, there were four children in their family. The and sister Lyusya, were from their mother’s previous marriage, and the older Liza and Kostya were Nikolai’s children. However, no one noticed the difference, all the children grew up like family. My stepfather worked for several decades as the head of the local track distance. Of course, he believed that his sons would follow in his footsteps. However, the life path of Alexander Efimov developed in a completely different way.

One day, a truly fabulous miracle happened in their village. In broad daylight, an airplane equipped with skis made an emergency landing on a snowy pasture. Enchanted children and adults crowded around the plane until late at night. Then few people saw them even in the sky, but here you could touch, touch the magic apparatus. And, of course, all the rural boys certainly decided to become pilots. Since then, Alexander and his half-brother Konstantin have only played aviators. And soon another propaganda plane visited the village. The guests gave the peasants leaflets and newspapers with stories about the air fleet. The children got specific advice on how to make flying models on their own at home.

From a conversation with A.N. Efimov: “I repeatedly made a statement that during the war there were not only ground penal battalions, but also aviation ones. And they always answered me: why did you get it, there were no such penal battalions. However, I did not forget how they repeatedly covered me, an attack aircraft, in the air. As I remember now: the commander of the Il-2 squadron is covered by a pilot with the rank of private. I saw his aviation raglan, on the buttonholes there were marks from the “sleepers”. Before the demolition, he was a colonel.

Over the years, the passion for aviation, the desire to visit the sky, Alexander only increased. In fairness, it is worth noting that Nikolai Gerasimovich supported his hobby. Perhaps he felt that it would become Alexander’s main business. In the thirty-seventh year, my stepfather was arrested. For two years he suffered in prison, until he was finally acquitted. He returned to his family, but soon died. At the same time, the Efimovs moved from Kantemirovka to the house of their mother’s relatives in the district center of Millerovo, located in the Rostov region. And the eldest son Konstantin went to study in the city of Voronezh. Alexander continued his studies in the seventh grade of the local school number 2 and graduated from it in 1940.

During the war, Efimov’s half-brother, Konstantin, would become a scout. His work was strictly classified, the family did not know anything about him. It was only after the war that information appeared that Konstantin Efimov worked abroad, and was awarded many orders for the successful completion of assignments. And Liza, the daughter of Nikolai Efimov, was killed by the Nazis during the occupation. She was buried in her native Kantemirovka.

While still a student, Alexander began to attend a school aviation club, in which, together with other boys, he built the simplest aircraft with motors on rubber bands.