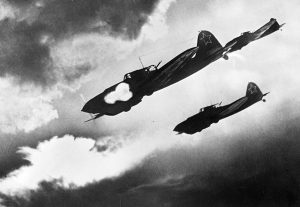 There are no safe jobs in war. Everyone risks. But, in my opinion, there is nothing more terrible than the combat work of an attack pilot. Everything shoots at the attack aircraft. Starting from infantry rifles, ending with anti-aircraft artillery. An attack aircraft is a desirable prey for an enemy fighter. Almost all battles take place over enemy territory. But attack aircraft were not taken prisoner. The attack aircraft is the object of well-deserved hatred of the enemy. More than attack aircraft, they only hate snipers.

Stormtrooper losses are huge. Not without reason, it was attack aircraft that were awarded for the number of sorties. For example, the standard for the title of Hero of the Soviet Union, during the Great Patriotic War, was 30 daytime sorties or 20 night ones. For the Order of the Red Star, the pilot was presented for 10 daytime sorties or 5 night ones.

This standard was established by the People’s Commissariat of Defense of the USSR on July 19, 1941. And given how sparingly they were rewarded at the beginning of the war, you understand that even one sortie is already a feat!

Today’s story about the legend of attack aviation:

Air Marshal of the USSR

Twice Hero of the Soviet Union, Honored Military Pilot of the USSR, Doctor of Military Sciences.

Air Marshal A.N. Efimov
The future marshal was born in the village of Kantemirovka, Voronezh region, in the family of a railway worker. However, much to the chagrin of his father, the son did not want to follow in his footsteps. Alexander Nikolayevich suffered from heaven since childhood.

Like most Soviet children who dreamed of the sky, Alexander began his journey into aviation from a school aircraft modeling circle. Then there was a glider school in Millerovo. On August 18, 1938, Alexander Nikolayevich took to the skies for the first time. From that moment on, Efimov no longer sees any other future.

Yesterday’s cadet was very lucky. He got into the squadron of one of the most experienced pilots of the regiment – Captain V.A. Malinkin. Which does not allow young people to combat work until they gain the conditions necessary for fighting. Former cadets are trained right in the regiment.

The first, most important sortie in the life of a young pilot, Alexander makes an attack on the Osuga railway station, Kalinin (now Tver) region. The sortie went very well, several enemy trains were destroyed. The squadron returned without loss.

By the beginning of the Battle of Kursk, Alexander Nikolayevich was already an experienced pilot, group commander, and deputy squadron commander. The command entrusts the Efimov group with the most important tasks.

Then the most difficult battle of the future marshal takes place.

In mid-July 1943, the air regiment was ordered to launch a bombing and assault attack on the retreating enemy columns in the area of ​​​​the villages of Sorokino and Ukolitsa. The task is entrusted to the most experienced pilots of the regiment. The group sent to the village of Sorokino includes the crew of Senior Lieutenant Efimov.

The situation in the war is changing very quickly. When the group arrived in the strike area, there were no retreating German columns. The enemy stopped their retreat and dug in on the outskirts of the village. The Germans are burying tanks, self-propelled guns and artillery in the ground.

IL-2 storming German positions
The group commander decides to attack enemy armored vehicles as the highest priority target. Stormtroopers make two passes. On the first one, they treat enemy equipment with anti-tank bombs, on the second run, they hit the enemy’s manpower with rockets and cannon fire.

Having successfully completed the task, the attack aircraft lay down on the reverse course. In the middle of the way, the squadron commander notices a large group of German aircraft storming our troops on the march. You have to rescue yours. Captain Malinkin gives the order to attack.

Four attack aircraft are attacking a group of 13 Me-110 multipurpose fighters and 4 FW-190 escort fighters!!! The ratio of forces and types of aircraft is simply suicidal.

Having crept up at low altitude undetected, the group attacks. With the very first salvo of cannon, Captain Malinkin tears Messer to shreds. However, this effect of surprise is exhausted. The dog fight begins. In which the Germans have all the advantages.

The first to be shot down was the car of junior lieutenant Zinovsky. The line of stormtroopers is broken. Efimov’s side gunner sets fire to the second Messer. But at this time, Alexander’s wingman, junior lieutenant Petrov, was shot down.

Malinkin and Efimov are trying to cover each other. Snarling with cannon fire, they lead the Germans away from the beaten infantry.

But the balance of power is unequal. Captain Malinkin is soon shot down. Already falling, he gives the order to Efimov to leave.

Alexander abruptly drops speed and altitude, trying to hide against the backdrop of the forest. The Germans jump ahead, but soon return and start searching. Efimov was lucky, very soon the Fritz ran out of fuel and they returned to the airfield.