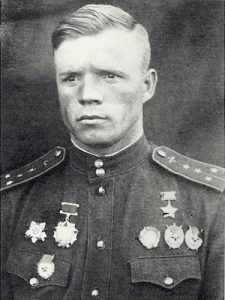 Since August 10, 1942, junior lieutenant A.F. Klubov in the army: in the position of commander of the 84th “A” IAP. He fought in the Northern Group of Forces of the Transcaucasian Front and on the North Caucasian Front. Participated in the battle for the Caucasus and the North Caucasian operation. He flew on the I-153 and I-16. November 2, 1942 near the village of Gizel (Prigorodny district, North Ossetia) was shot down in an air battle. Until the last, trying to save the car, the pilot fought the flames, burned himself, but in the end he was forced to jump out with a parachute, receiving severe burns to his face and neck.

Until January 1943, he was treated in a hospital (in the city of Derbent, Dagestan). After returning to his regiment, he continued combat sorties on the I-16 fighter. In February 1943 he was appointed deputy squadron commander. In April 1943, the 84th “A” IAP was withdrawn to the rear for resupplying.

At the end of May 1943, A.F. Klubov was transferred to the 16th Guards IAP, where he already flew on the American Airacobra. He fought on the North Caucasian, Southern, 4th Ukrainian, 2nd Ukrainian and 1st Ukrainian fronts. He participated in the air battle in the Kuban, the Donbass and Melitopol operations, the battles in the Yassky direction, the Lvov-Sandomierz operation.

By September 4, 1943, the deputy commander of the 1st squadron of the 16th Guards Fighter Aviation Regiment (9th Guards Fighter Aviation Division, 8th Air Army, Southern Front) Guards Senior Lieutenant A. F. Klubov made 310 sorties, conducted 84 air battles, in which he personally shot down 14 and as part of a group of 3 enemy aircraft. By decree of the Presidium of the Supreme Soviet of the USSR of April 13, 1944, he was awarded the title of Hero of the Soviet Union with the Order of Lenin and the Gold Star medal (No. 1320). In October 1943 he was appointed squadron commander.

On May 10, 1944, a tragic incident occurred in the life of A.F. Klubov, which almost broke his entire biography. On this day, during a training flight on the Aerocobra, the commander of the squadron of the Guard, Captain I.K. Olefirenko, died. In the evening, the pilots commemorated their comrade-in-arms, not without alcohol. Returning from the commemoration to the hostel, A.F. Klubov, in the ensuing quarrel, shot at the armaments master of the 508th IAP Sergeant A.D. Smirnov and hit him in the head. The soldier was taken to the hospital in critical condition. The case took a bad turn – they were going to give the pilot to the tribunal. But the personal intervention of A. I. Pokryshkin helped to save an outstanding fighter pilot for our aviation, he was left in the regiment. In October 1944, A.F. Klubov was appointed assistant commander of the regiment.

On November 1, 1944, the assistant commander for the airborne rifle service of the 16th Guards Fighter Aviation Regiment (9th Guards Fighter Aviation Division) of the Guard Captain A.F. Klubov died in a plane crash during a training flight on a La-7 fighter (after landing the plane rolled out of the runway and hooded, the pilot was seriously injured and died 1.5 hours after the crash). He was buried on the Hill of Glory in the city of Lvov (Ukraine), and in June 2001 he was reburied at the Vvedensky cemetery in Vologda.

In total, he made 457 sorties, in 95 air battles he personally shot down 31 enemy aircraft and 3 as part of a group (another 16 aircraft were destroyed as part of a group on the ground when attacking enemy airfields). By decree of the Presidium of the Supreme Soviet of the USSR of June 27, 1945, Captain A.F. Klubov was posthumously awarded the second Gold Star medal.