What were they like, those “old men” who went into battle? 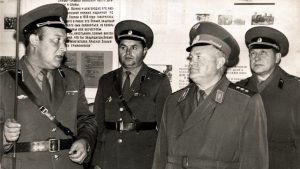 The war for the twice Hero of the Soviet Union Guard Captain Gulaev quite unexpectedly ended in early September 1944. By decision of the command, he was forcibly sent to study. Colonel-General Gulaev with an inspection in one of the units of the 10th Air Defense Army.

Formally, the reason for the withdrawal from the front of one of the best fighters, the fastest and most successful pilot of World War II was the desire to save the illustrious ace by sending him to study at the N Air Force Engineering Academy E. Zhukovsky. But most likely, he was removed from the active army, because they were sure that before the end of the war he would bring down so many enemies that he would have to be re-awarded with the third Golden Star of the Hero of the Soviet Union.

It was impossible to allow this, so they found an acceptable way to remove the indefatigable pilot away from the front line. The numbers are telling. By September 1944, Gulaev had 57 downed Nazi aircraft on his account, Kozhedub had 47, Pokryshkin had 57. Pokryshkin, as a division commander, was forbidden to take an active part in air battles, but after that he shot down 4 enemy aircraft, Kozhedub managed to shoot down 15 more.

It is not known how much Gulaev would have managed to beat, but it is unlikely that Pokryshkin would have been beaten. And for more than 60 victories, the third Star would have to be given without fail. N. Gulaev studied until May 1950. He, as a student of the Academy, in April 1945 was awarded the next military rank of major, and in May 1949 – lieutenant colonel. After graduating from the Academy, Gulaev was appointed regiment commander, but ended up in Korea, where he served in a command post and did not participate in battles.

In 1953 he returned to his homeland. Since 1954, for five years he commanded the 133rd Fighter Division, stationed in the Yaroslavl region, then was transferred to Yelnya to the same position. In 1956, Gulaev was a delegate to the famous 20th Congress of the CPSU, at which the so-called personality cult of Stalin was exposed. I can imagine what feelings overwhelmed the twice Hero of the Soviet Union, who performed his exploits under the slogan “For the Motherland! For Stalin!” In 1960, already Major General of Aviation graduated from the Military Academy of the General Staff, and not just anyhow, but with a Gold Medal. Since 1961, he has been the commander of the 2nd Air Defense Corps near Rzhev, and since 1964, his ten-year command of the 10th Air Army, located near Arkhangelsk, begins. In 1972, Nikolai Dmitrievich was awarded the next military rank – Colonel General.

In 1974, Gulaev was appointed Deputy Commander-in-Chief of the country’s air defense forces for combat training. All the years that have passed since the end of the war, Gulaev actively flew. He was one of the first military leaders who mastered the control of a jet aircraft, after which he flew many types of combat jet vehicles. Most of all, he fell in love with the MiG-21, on which he flew until 1967, after which, by order of the Commander-in-Chief of the Air Defense Forces, Deputy Minister of Defense of the USSR, Marshal P.F. Batitsky, he was removed from any independent flights. In 1976, Gulaev was appointed to the offensive post of assistant commander of the Moscow Air Defense District for armaments. In November 1979, the 61-year-old full of strength and absolutely healthy colonel general was sent to the reserve. Until the end of his life, Nikolai Dmitrievich Gulaev lived in Moscow.

He took the resignation very painfully, constantly worried, which was the reason for his premature death. The great pilot died on September 27, 1985. He was buried at the memorial Kuntsevo cemetery, a branch of Novodevichy. Let’s take another look at his achievements and mentally applaud the unique air fighter. According to official data, Nikolai Dmitrievich Gulaev made 250 sorties, in 69 air battles he shot down 57 enemy aircraft personally and 3 in a group, including two aircraft – by ramming. His record – in 42 air battles in a row to shoot down 42 enemy aircraft – will never be beaten. At the same time, it must be taken into account: he never went on a “free hunt”, he served in air defense, so his task was to prevent German bombers from reaching our positions, to cover ground targets – airfields, crossings, railway junctions. It should also be noted that, according to the recollections of colleagues, Gulaev had much more actual victories.

He generously shared them with his followers, family comrades, who sent money to their children, since each victory paid a lot. He had to fight at Stalingrad, Belgorod and on the Kursk Bulge, he took part in the liberation of the Right-Bank Ukraine, Belarus, Poland, Romania, Czechoslovakia. During the war, he went through all the steps of his career: he was an ordinary pilot, flight commander, deputy commander and squadron commander, regiment navigator, deputy regiment commander. The Motherland awarded the Hero on merit twice: two Orders of Lenin, the Order of the October Revolution, four Orders of the Red Banner, two Orders of the Patriotic War of the 1st degree, two Orders of the Red Star, the medal “For Military Merit” – and many others.