Member of the Great Patriotic War 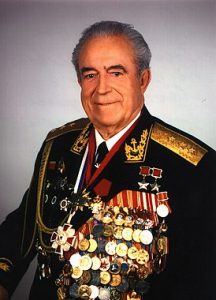 Born May 1, 1922 in Moscow in a working class family. My father worked in a special purpose garage at the Council of People’s Commissars. When he was transferred to work in government facilities in the Caucasus, from 1927 the family lived in Sochi and Matsesta, from 1934 in Gagra. In 1938 they returned to Moscow. He graduated from 10 classes at school number 94 in Moscow in 1939. At the same time he graduated from a glider school in Gagra (1937, although according to publications on the Internet, he received a certificate of a glider pilot at the age of 12[4]). In 1940 he graduated from the Krasnopresnensky (according to other sources Tushinsky) flying club.

In the Red Army since September 1940. He graduated from the Chuguev military aviation school of pilots in 1941, the Batay military aviation school of pilots in 1942 (at that time the school operated in evacuation in the Azerbaijan SSR). From March to May 1942, he underwent additional training in the 4th reserve aviation regiment of the 3rd air brigade of the Air Force of the Moscow Military District (Gorky). Member of the CPSU since 1943.

The commander of the 5th Guards Fighter Aviation Regiment (207th Fighter Aviation Division, 3rd Mixed Aviation Corps, 17th Air Army, South-Western Front) Guards Junior Lieutenant Popkov by August 1943 made 168 sorties, in 45 Air battles shot down 17 enemy aircraft. The title of Hero of the Soviet Union was awarded on September 8, 1943. The squadron commander of the same regiment (11th Guards Fighter Aviation Division, 2nd Guards Assault Aviation Corps, 2nd Air Army, 1st Ukrainian Front) Captain Popkov by February 1945 made 325 sorties, in 83 air battles personally shot down 41 and in group 1 enemy aircraft. He was awarded the second Gold Star medal on June 27, 1945. The Americans included him in the top ten strongest aces in the world [5]. In total, by May 9, 1945, he completed 358 sorties, conducted 85 air battles, personally shot down (according to confirmed data) 40 German aircraft [6]. At the same time, the literature often indicates a greater number of air victories by V. I. Popkov, for example, 41 personal and 17 group [7]. At the same time, 1 enemy aircraft was shot down by a ram attack in an air battle on April 18, 1945.

During the war years, he was wounded twice, after one of his first air battles he had to make an emergency landing, and in the battle on August 3, 1942 he was shot down and escaped by parachute (while also receiving burns). He fought on domestic fighters LaGG-3, La-5, La-7.

Participant of the Victory Parade on June 24, 1945 in Moscow, walked in the 1st rank of the Heroes of the Soviet Union of the 1st Ukrainian Front.

After the war, he continued to serve in the Air Force, commanding a squadron of the same regiment (Central Group of Forces, then the Group of Soviet Occupation Forces in Germany) until January 1948, after which he was sent to study. In 1951 he graduated from the Air Force Academy in Monino[8]. From May 1951 he commanded the 925th Fighter Aviation Regiment in the Tauride Military District.