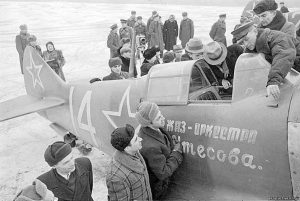 Vitaly Ivanovich Popkov, the future Maestro and future Twice Hero of the Soviet Union, went to the front in early May 1942 after several reports.

From the very beginning, the young pilot’s service did not work out. He was almost immediately appointed “eternal orderly”. Vitaly Ivanovich appreciated humor and jokes, and he himself was not a blunder, to laugh. Pilots in one liberated village picked up a puppy, and the future twice hero taught him to carry out combat commands. During the formation, the pilots choked with laughter when they saw how the puppy was following the commands of the regiment commander.

The authorities “appreciated” the talent of a trainer in Popkov and he was assigned to an indefinite order in the kitchen. As the regimental commander put it: “Until he turns blue.”

You probably remember well how in the movie “Only Old Men Are Going to Fight” Lieutenant Alexandrov (Grasshopper) was appointed an eternal orderly.

The pilots of the regiment fought air battles, and the young pilot was peeling potatoes in the kitchen.

So on this May morning, our guilty hero was cleaning another bucket of potatoes. Suddenly, two Dornier bombers appeared over the airfield, under cover of two Messerschmitts.

It would seem that nothing will save our fighters standing on the takeoff. Vitaly Ivanovich did not lose his head. He jumped into the nearest plane and was able to take off. And in the first attack shot down a German bomber.

The pilot diverted the attention of the enemy to himself, and allowed the plane of the regiment commander to take off. In the morning turmoil, the regimental commander jumped into his cabin without even having time to put on his tunic. So, thanks to the guilty pilot, the regiment was saved.

Accepting congratulations on the first victory, the young pilot suddenly announced that it was, in general, not difficult to do this and he would have shot down more, but the regiment commander, who took off in his underwear, scared all the Germans with his appearance.

The pilot was allowed to fly and success came to him. By August 1942, he had five aircraft on his account. In one of the battles, the pilot shot down his next plane, but he himself was shot down. The plane burst into flames. The unconscious pilot fell out of the cockpit, but the parachute canopy was damaged by the flames and did not open. It seemed that death was inevitable, but he was lucky, he fell into the swamp. Burnt, losing consciousness, he walked towards the front. I came to my senses already in the hospital and immediately asked to report myself to the regiment.

Soon, the ward was overcrowded with pilots, delighted with his unexpected rescue. Here they congratulated him on being awarded the Order of Lenin.

Just six months later, Popkov became a squadron commander. This squadron was known throughout the front. After all, eleven of its pilots became Heroes of the Soviet Union.
V.I. Popkov received his first Hero Star. 1943
Popkov continued to fly, increasing his combat score. He was awarded the Golden Star of the Hero. And in their free time from flying, the pilots organized a musical orchestra, led by Vitaly Ivanovich.

In one of the hot battles near Dnepropetrovsk, the pilots of the squadron destroyed ten enemy aircraft in one battle, without losing a single one of their own. The mood was upbeat, and then his deputy, also a famous pilot Sergei Glinka, offered to sing. And the whole squadron sang: “Oh, Dnipro, Dnipro, you are wide and mighty …” You could get scolded for extra talk on the air. But, at the end of the song, a sweet female voice was heard on the air: “Thank you very much for the concert, maestro!”

So our hero got the call sign “Maestro”.
The famous singer Utyosov purchased two fighter jets at his own expense. On board the aircraft was written: “Jolly guys.” There were no questions about who to transfer these aircraft to. Of course, the best pilots. These aircraft were transferred to the singing squadron, one of which later flew Vitaly Ivanovich. The pilot went through the entire war, shot down more than forty enemy vehicles, became twice a Hero of the Soviet Union, a regiment commander, and after the war rose to the rank of aviation general.

Transfer of Utyosov aircraft to pilots. On one side it was written: “From the Utesov jazz orchestra”, on the other: “Jolly guys”

His memoirs formed the basis of one of the best and most popular films about the Great Patriotic War, “Only Old Men Go to Battle,” where he became the prototype for two characters at once, Lieutenant Aleksandrov and Commander Titarenko.