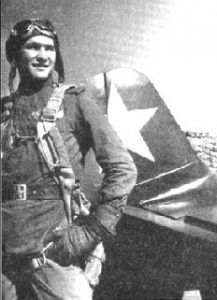 Despite the objections of the cadet, he was left at the school as an instructor, and the instructors always left the best of the best. Note that the issue of 1941 gave the country 54 Heroes of the Soviet Union, 4 twice and 1 three times Heroes, that over the next 3.5 years they will shoot down about 1000 enemy vehicles in the air, that is, in terms of its composition, this issue had no equal in history Soviet Air Force.

The future ace won his first victory in the first battle. Success rarely came to the pilot immediately, and although Borovoy was an instructor at the school for six months, his victory can only be explained by the exceptional perseverance and dashing attacks of the young pilot. True, the Hurricane, on which he then flew, was modernized in terms of weapons: with the light hand of B. F. Safonov, whose experience was widely known, 4 Browning 7.7-mm wing machine guns were replaced by 4 ShVAK guns caliber 20 mm.

8 sorties made by the Borovs on the Kalinin Front, as part of the 728th Fighter Aviation Regiment, brought 3 victories, he was appointed flight commander, awarded the Order of the Red Banner. Soon the pilot had a successful air battle in the Zubtsov area, where, in front of the front commander, Colonel General I. Konev, he first shot down a Ju-88 bomber, and then a Me-109 fighter, receiving gratitude for the excellent conduct of the battle. His name becomes known in parts of the front, along with experience comes composure, self-confidence is further strengthened.

Most of the sorties Borovoyh spent on aircraft, the flight performance of which was inferior to the German ones (Hurricane Mk.II, Yak-7B). Tactical literacy and military cunning, which our ace never forgot about, helped to compensate for the advantage of enemy vehicles: “A pilot must not only master the aircraft perfectly, but also have military cunning. Knowledge multiplied by military cunning is the success of the battle, the key to victory over the most powerful and insidious enemy.” He was considered an ace, admired his courage. Engaging in combat with an enemy outnumbered, he was able to determine exactly when to open fire.

In the middle of 1942, the Deputy People’s Commissar of Defense, General A. Novikov, entrusted the well-known Soviet pilot I. E. Fedorov with the formation of a separate regiment of aces under the 3rd Air Army of the Kalinin Front – in defiance of the Germans. They already had a special air group of 28 most experienced pilots flying Messers with playing cards painted on the fuselages.

A.E. Borovykh at his Yak-7B.
And in one of the battles in August 1942, Fedorov, paired with Andrei Borovykh on the Yak-7, while patrolling along the front line, encountered a large group of Me-109Gs. A fierce, fleeting battle ensued. Literally in 5 minutes, the Borovykhs shot down the Messer with the Queen of Spades on board, and Fedorov struck down the ace of hearts (as it turned out later, the commander of the enemy air group).

In heavy air battles on the Central Front, on the Kursk Bulge, flying already on the Yak-7B, he shot down 8 German aircraft. The combat area of ​​the ground forces, limited to a minimum, left a peculiar imprint on the nature of air battles there. The downed planes easily left the front line, and the pilots who jumped out with a parachute, if they were not captured, then soon got to their units.

In one of the battles, Andrey Borovykh could not avoid the enemy line. He left the fighter with a parachute, and his wingman Mikhail Redkin prevented the Nazis from shooting the pilot in the air. He whirled in the air until Andrei sank to the ground. The very next day, barely returning to the regiment, Borovykh again flew out on a combat mission. In these battles, Borovykh literally stood up for his native home, because his parents, brothers and sisters remained in the recently liberated Kursk. Later, he learns that his father, Yegor Grigoryevich, died during a German air raid on Kursk.

Here is what Andrei Yegorovich Borovoykh himself writes about those days:

“The air battles over Kursk, in which I happened to be a participant, began long before the historical Battle of Kursk. Already in April – May 1943, their tension reached extraordinary strength. I remember that the pilots of our 157th Fighter Aviation Regiment on other days had to make 5 – 6 sorties, but all with honor withstood this load, and many fought bravely and boldly.

The fight is led by Andrey Borovykh

Fighter pilot Andrey Borovoykh is fighting on a Yak-9 aircraft.
In the battles for Kursk, I was a squadron commander and I must say that all the pilots of the unit fought courageously, staunchly and selflessly.