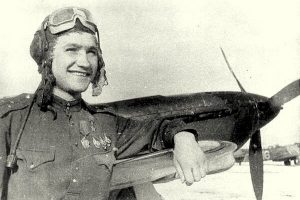 In 1940 he entered the Chuguev Military Pilot School. After graduating from college, he was left in it for six months as an instructor. In December of the same year he was sent to the front. He started to fly on our old “Ishachka”, after on the modernized British fighter “Hurricane Mk 2”. In early 1942, he fought as part of the 728th Fighter Regiment on the Kalinin Front. During eight sorties, he scored three air victories and was appointed flight commander. Then he was awarded the Order of the Red Banner. From September 1942 he was transferred to the 157th IAP on the Central Front. He began to make his sorties first on the LaGG-3 aircraft, later on the Yak-7B. During the Battle of Kursk, he was shot down, but successfully jumped out with a parachute and soon returned to sorties.

A.E. Borovykh near the Yak-1.
During the air battles near Kursk, junior lieutenant A.E. Borovoy destroyed 8 enemy aircraft. By June 1943, he had 12 shot down aircraft personally and 14 as part of a group. At the end of August, he was awarded the title of Hero of the Soviet Union and a new appointment to the post of squadron commander. After the Battle of Kursk, Andrei Yegorovich participated in the battles for Novgorod-Seversky, Glukhov, Chernigov. In the autumn of 1944, his regiment was re-equipped with the latest Yak-3 fighters. A series of heavy battles began for Belarus and Poland. By December 1944, Captain Borovoy shot down another 19 enemy planes. By decree of the Presidium of the Supreme Soviet of the USSR of February 23, 1945, he was awarded the title twice Hero of the Soviet Union. In total, during the war years, the pilot made about 500 sorties, in 113 air battles 32 aircraft were personally shot down and 14 as part of a group. According to other sources, the number of downed aircraft is somewhat different – 27 personal and 17 group victories.

post-war period.
After the end of the war, he continued to serve in the Air Force. Among the twenty twice Heroes of the Soviet Union, the so-called “golden horde”, Captain Borovoy was enrolled in the Air Force Academy. He continued to fly and master new types of combat aircraft – already jet ones. At various times he commanded a regiment, then a division and a corps. In 1957 he graduated from the Higher Military Academy, after which he commanded various aviation formations in the Far Eastern and Kiev military districts. In 1968 he was appointed commander of the air defense aviation and was awarded the rank of colonel general. In 1977 he retired and worked at the Institute of Military History. He published several scientific articles, was a deputy of the Supreme Soviet of the USSR. He died under unclear circumstances on November 7, 1989. He was buried at the Novodevichy cemetery.